Injured in A Bicycle Accident? 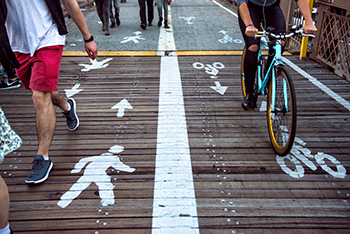 In the hilarious film “Airplane!” a scene takes place between two PA announcers who disagree regarding the proper use of the airport’s white zone and red zone. For bicycle users and pedestrians on the Brooklyn Bridge, relying on color-coded zones isn’t necessary. The bicycle lane is designated with an image of a bicycle in it and the pedestrian lane is designated with an image of a walking stick figure in it. And, the lanes, which are next to each other, are separated by a white line. No confusion there, right? But whether that system was a proper and adequate one would become the key subject of a plaintiff’s New York bicycle injury case according to Olenick v City of New York.

However, sometimes, your accident may have facts that make multiple people potentially liable. Normally a case like this would find the cyclist pursuing just the pedestrian. However, this bicyclist got creative. He also went after the city. Based upon the facts of this case, he presented an argument that the bicycle and pedestrian lanes lacked proper traffic control devices and didn't create enough separation between the bike lane and the pedestrian lane.

In a case like this, one against a municipality, the plaintiff must give the court proof that the municipality had something called “actual or constructive notice of a hazardous condition.” Or, that the City KNEW it had something dangerous. This bicyclist argued that the city knew because there were a bunch of accidents that both took place in the 24 months preceding this incident that was very similar to the events of this situation. They included one case in which a cyclist got hurt swerving to avoid a pedestrian as well as multiple collisions between cyclists and pedestrians.

The city tried (unsuccessfully) to argue that it was protected from responsibility by hiding behind a legal principle that provides legal immunity when a municipality is carrying out a governmental function. But in this case, the court sided with the bicyclist because the city had not performed any type of study before carrying out its plan for pedestrian and bicycle traffic control on the bridge. Instead, the Court found that the City just put in some potentially dangerous lanes, hoping for the best.

Just as there are many possible paths to get to a single destination, there can often be multiple different ways to approach getting a full and fair recovery for the injuries you suffered in your bicycle accident. Bike Lawyer Ben Rabin https://www.rabinlawfirm.com/benjamin-rabin/ at The Rabin Law Firm has worked hard on behalf of many bicyclists to help them get what they deserve in their injury cases. To set up an initial consultation, contact Ben at 877-451-2453 or through his website, https://www.rabinlawfirm.com/